Igor Ansoff introduced the concept of “Strategic Issue Management” in 1980. A strategic issue is “…a forthcoming development, either inside or outside of the organization, which is likely to have an important impact on the ability of the enterprise to meet its objectives.” (Ansoff, 1980). As he adds, an issue can be an emerging opportunity in the organization’s environment or an internal strength, as well as an external threat or an internal weakness, respectively.

While Environmental Scanning primarily deals with the identification of issues, the concept of Strategic Issues Management puts more emphasis on monitoring issues and reacting to them. The issue life cycle was introduced by Downs as a model for the development of an issue throughout time (Downs, 1972). A common visualization of the issue life cycle is shown in the figure below, which characterizes the issue from its emergence until its disappearance. 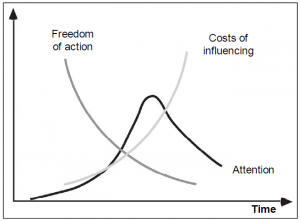 It is shown that the opportunity for an organization to react upon an issue (freedom of action) decreases throughout time in several aspects:

At the same time, the organization’s costs of responding increases over time (Liebl, 2000) In addition a interest curve can be defined that reflects public interest in an issue. The rapid increase of the curve is due to the fast dessimination of information and opinion through the various media channels. The public attention than puts pressure on policy makers to take actions such as launching legislative initiatives. However the attention also decreases rather fast as public interest is difficult to maintain for long over time (Liebl, 2003)

For Organizational Future Orientation we hypothesis that issue management inside an organization follows a similar sequence. That could mean that corporate foresight activities would help to detect the emergence of an issue early. But at the same time corporate foresight needs also to interprete the impact of the issue and propose an adequate response to it while the attention of internal stakeholders is still high. If the attention is already starting to drop the risk is that no action will be taken.

This blog article builds on the master thesis of Sebastian Knab.

Rohrbeck, R. 2010. Corporate Foresight: Towards a Maturity Model for the Future Orientation of a Firm. Heidelberg and New York: Physica-Verlag, Springer.